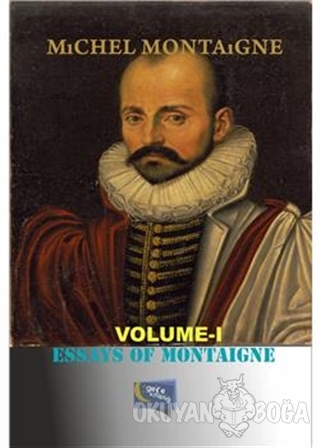 The present publication is intended to supply a recognised deficiency in our literature - a library edition of the Essays of Montaigne. This great French writer deserves to be regarded as a classic, not only in the land of his birth, but in all countries and in all literatures. His Essays, which are at once the most celebrated and the most permanent of his productions, form a magazine out of which such minds as those of Bacon and Shakespeare did not disdain to help themselves; and, indeed, as Hallam observes, the Frenchman's literary importance largely results from the share which his mind had in influencing other minds, coeval and subsequent. Book-I Chapter I That Men By Varıous Ways Arrıve At The Same End .

The most usual way of appeasing the indignation of such as we have any way offended, when we see them in possession of the power of revenge, and find that we absolutely lie at their mercy, is by submission, to move them to commiseration and pity; and yet bravery, constancy, and resolution, however quite contrary means, have sometimes served to produce the same effect.[Florio's version begins thus: "The most vsuall waie to appease those minds wee have offended, when revenge lies in their hands, and that we stand at their mercie, is by submission to move them to commiseration and pity: Nevertheless, courage, constancie, and resolution (means altogether opposite) have sometimes wrought the same effect."-[The spelling is Florio's D.W.] Edward, Prince of Wales [Edward, the Black Prince. D.W.] (the same who so long governed our Guienne, a personage whose condition and fortune have in them a great deal of the most notable and most considerable parts of grandeur), having been highly incensed by the Limousins, and taking their city by assault, was not, either by the cries of the people, or the prayers and tears of the women and children, abandoned to slaughter and prostrate at his feet for mercy, to be stayed from prosecuting his revenge; till, penetrating further into the town, he at last took notice of three French gentlemen, [These were Jean de Villemure, Hugh de la Roche, and Roger de Beaufort. Froissart, i. c. 289. {The city was Limoges. D.W.}]who with incredible bravery alone sustained the power of his victorious army. Then it was that consideration and respect unto so remarkable a valour first stopped the torrent of his fury, and that his clemency, beginning with these three cavaliers, was afterwards extended to all the remaining inhabitants of the city.