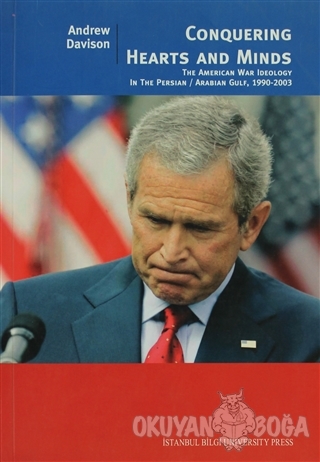 Conquering Hearts and Minds The American War Ideology in the Persian Arabian Gulf, 1990 - 2003

This book by Andrew Davison offers an exposition of the official American ideology of war in the Persian/Arabian Gulf: an ideology whose principal aims have been the manipulation and militarization of US public-political culture and the imperial reassertion of American global power. The book shows how the official war ideology was put in place by successive American presidents in order to justify the wars in Kuwait, Afghanistan, Iraq, and against the Al Qaeda Islamist movement more generally. It also compellingly displays how these wars, fought primarily over petroleum and political power in the Gulf, were characterized, since 1990, in terms of biblical and civilizational significance that mobilized the militarized support of the American public but distorted the contexts and stakes of the conflict in which the US remains violently involved. Two especially distinguishing qualities of this analysis are, first, that it draws our attention to the pervasive nonsecular character of Presidential rhetoric in the United States; and, second, that it demonstrates the continuity of militant, religious Presidential rhetoric across the spectrum of the American administrations for over two decades, despite the appearance of sharp antagonisms between Democrats and Republicans. Written for a broad audience, Conquering Hearts and Minds offers an accessible analysis for a wide variety of readers interested in the relationship between America and the Middle East, the "war on terrorism," the troubled state of international affairs and politics, and alternatives to endless war. "Conquering Hearts and Minds has immediate relevance to understanding what has been happening in the United States and the world and invites us to revisit and rethink not only how things might have unfolded differently but also how they may be different if we seek to move the world in the direction of much less violent and much more democratic futures." - Taha Parla, Boğaziçi University, İstanbul