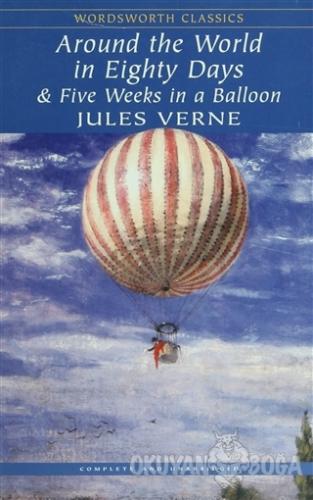 https://www.okuyanboga.com/around-the-world-in-eighty-days-and-five-weeks-in-a-balloon
Around the World in Eighty Days And Five Weeks in A Balloon
Wordsworth Classics
22.12

jules Verne (1828-1905) possessed that rare storyteller's gift of being able to present the far-fetched and the downright unbeliable in such a way as effortlessy to inspire his reader's allegiance and trust. This volume contains two of his best loved yardns chosen from among the sixty four titles of Les Voyages Extrardinaires Verne's pioneering contribution to the canon of modern science fiction.

Around the World In Eight Days (1873) relates the hair-raising journey made as a wager by the Victorian gentleman Phileas Fogg, who succeds but only just in circling the globe withing eight days. The dour Foggs obsession with his timetable is complimented by the dynamism and versatility of his French manservant Passepartout whose talent for getting into scrapes bring colour and suspense to the race againts time.

Five Weeks in a Balloon (1863) was Verne's first novel. It document an apocryphal jaunt across the continent of Africa in a hydrogen balloon designed by the omniscient imperturable and ever capable Dr Fergusson the prototype of the Vernian cerebral adventurer.