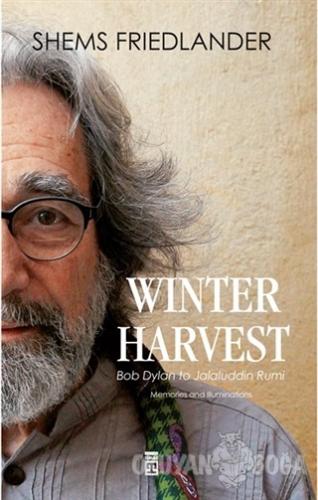 “I don't know what encourages me to do it, but I move to the circle and sit on my knees between Sheikh Muzaffer and his khalifa, Safer Baba. Not invited, I nevertheless nudge them aside and sit down. The zikr begins and I repeat the Names of Allah and do the swaying movements, which is natural for me. It becomes a part of me. I feel as though my soul has returned home.”

Winter Harvestis the long-awaited sequel toWhen You Hear Hoofbeats Think of a Zebra, now considered a Sufi classic. Friedlander has spent over 40 years in a Sufi order and is now sharing his stories and travels in the winter of his life.

Shems Friedlander is the author of nine books. He is a painter, photographer, designer, filmmaker and educator. Friedlander is Emeritus Professor at the American University in Cairo. He was selected in 2012, 2013, 2014 and 2015 as one of the 500 Most Influential Muslims in the World, in the field of Art and Culture, by the Royal Islamic Strategic Studies Center.

“Winter Harvestis a profoundly creative and spiritual pilgrimage with beautifully articulated memories of the past that evolve with inevitable and poetic precision into a unifying embrace of form and emptiness. I readWinter Harveststraight through and then again, embraced by its compassionate and profound view of impermanence that was always accompanied by a joyful celebration of being in the present.”

“It elevates one's spirit and makes you feel that you are sitting with Sufi sheikhs, gurus, Tibetan masters and other teachers who were part of the spiritual energy that moved from the East to the West.”