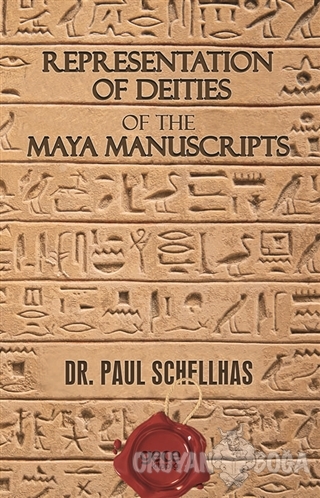 Representation of Deities of The Maya Manuscripts

Representation of Deities of The Maya Manuscripts
Gece Kitaplığı
15.60

God A is represented as a figure with an exposed, bony spine, truncated nose and grinning teeth.10-1It is plainly to be seen that the head of this god represents a skull and that the spine is that of a skeleton. The pictures of the death-god are so characteristic in the Maya manuscripts that the deity is always easily recognized. He is almost always distinguished by the skeleton face and the bony spine. Several times in the Dresden manuscript the death-god is pictured with large black spots on his body and in Dr. 19ba woman with closed eyes, whose body also displays the black spots, is sitting opposite the god.

Several times (Dr. 12band 13b) he is represented apparently with distended abdomen. A distinguishing article of his costume is the stiff feather collar, which is worn only by this god, his companion, the war-god F, and by his animal symbol, the owl, which will both be discussed farther on. His head ornament varies in the Dresden Codex; in the first portion of the manuscript, relating in part to pregnancy and child-birth (see the pictures of women on p. 16, et seq.), he wears on his head several times a figure occurring very frequently just in this part of the Dresden Codex and apparently representing a snail (compare Dr. 12band 13b), which among the Aztecs is likewise a symbol of parturition. In view of these variations in the pictures of the Dresden Codex, it is very striking that in the Codex Tro.-Cortesianus, there is only one invariable type of the death-god.